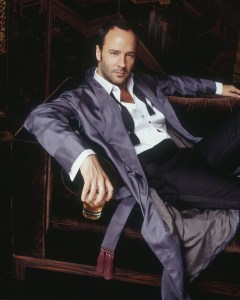 This post has been inspired by an article I read yesterday in The Independent. I have to admit I never read The Independent, but they had a big article about Tom Ford with inch headlines on the front page, so I made an exception I bought it. I didn’t read much else but the article was quite interesting. Tom is my all time favourite hero and I love, LOVE HIM! I’m gonna say this again and again but his era for Gucci was the best not only for Gucci, but for the whole industry. It was then when I mostly fell in love with fashion. It’s all thanks to his sexy clothes, that I’m hoping he’s gonna start making for women again. And it seems like it. He said after he’d made a movie he would come back to designing, so let’s all hope so. The forementioned movie is called the Single Man and is tipped for an Oscar. He not only directed it but starred in it alongside Colin Firth, who was nominated and won an award for it at The Venice Film Festival. It’s out in February next year and I can’t wait to watch it. Ford is getting praises for whatever he gets into, so we can only wait with excitement to see what he will be up to next. In the meantime you can grab a pair of goregous sunglasses by Tom Ford or a perfume, that will not only smell great but will look very stylish on any dressing table. Here I’ve included a trailer for The Single Man. Amazing and breathtaking just like Tom himself!
Have a stylish day.