When Barack Obama was voted the first black president it was a massive change for the world of politics. Little did we know his wife would have a huge impact in the world as well. His speech about change was very appropriate for more than the obvious reasons. Ever since the inaugural ball, and Michelle Obama stepping out in THAT gown by Jason Wu, the world of fashion suspected maybe the change wouldn’t only happen in politics.
Michelle Obama knows how to dress. It’s been a while since people were so interested what the First lady would wear. Probably not since Grace Kelly, the princess of Monaco, who’s to this day seen as a style icon, would the First Woman of state cause headlines of her own and even appear on a cover of Vogue! But people can’t get enough of Michelle Obama. There is more that meets the eye, but today we’re talking about here style. And great style she’s got! With nice womanly figure it makes the choices easier. She often wears well fitted shift dresses that suit her so well. And thanks to her skin colour she can be mire bold with her colour choices and she’s making the most of it. Expect the lot: yellows, greens, reds, purples.. She wears it all with grace and looks great. She shows women that you can have fun with ‘workwear’. There are certain politics in fashion and Michelle is a proof there can be fashion in politics. Other First Ladies should take notice! Hers is a way how to look glamorous and present your state well at the same time.
Have a stylish day. 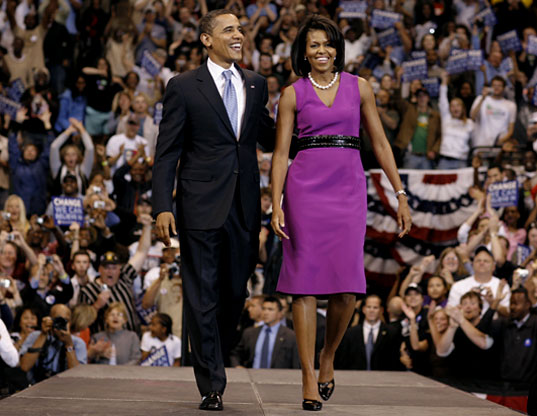